During Family STEM Night, faculty turn the school into a veritable Exploratorium. Kindergarteners through 4th graders come with their families to the school and enjoy a variety of hands-on science, technology, engineering, and math activities. 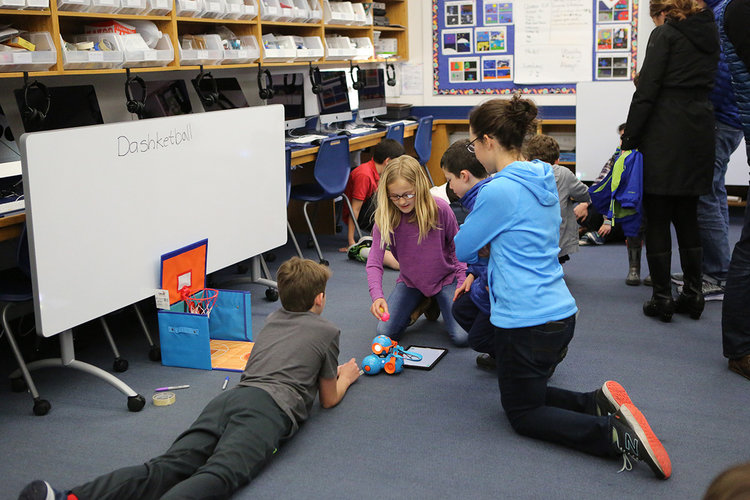 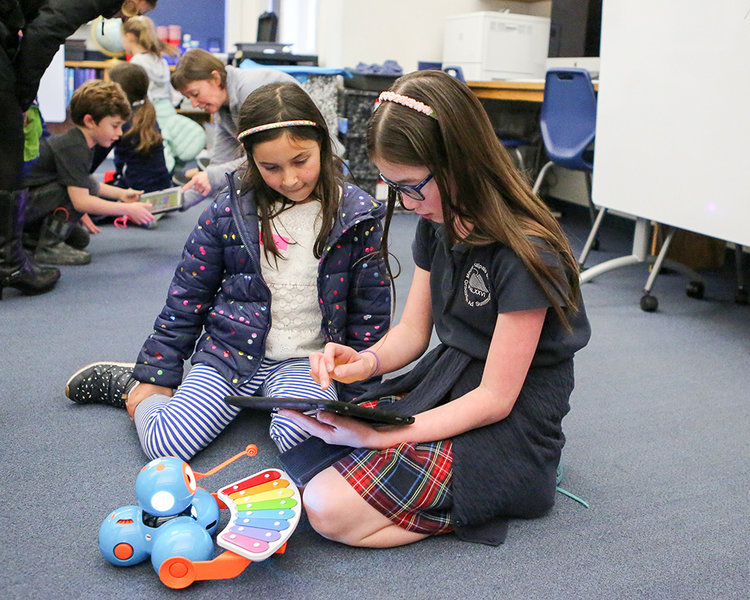 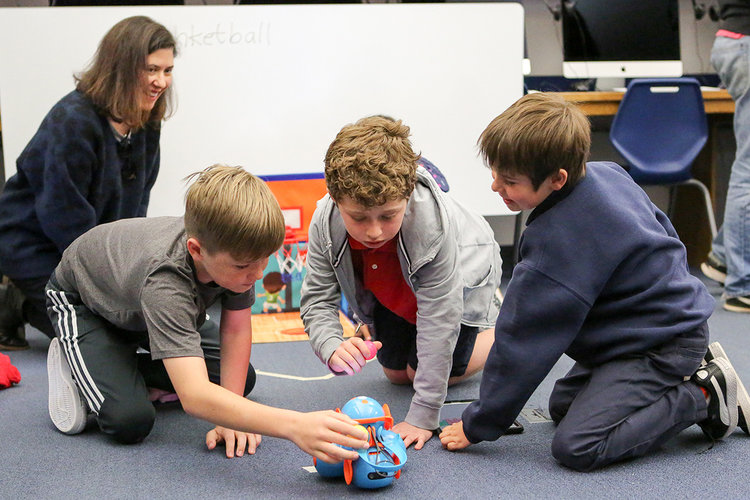 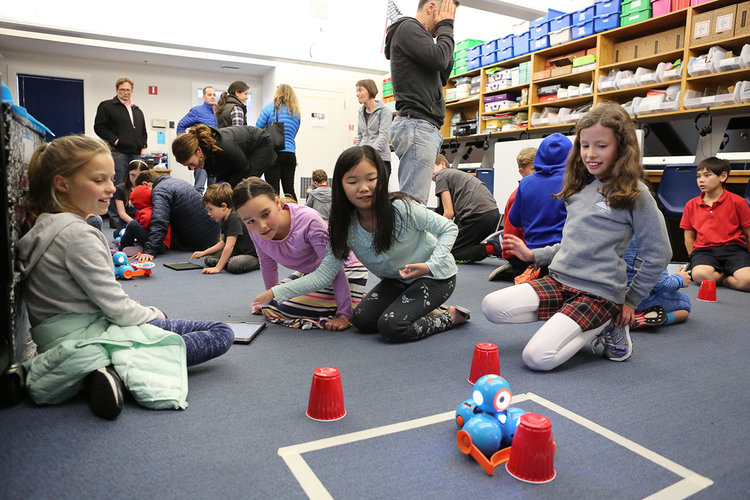 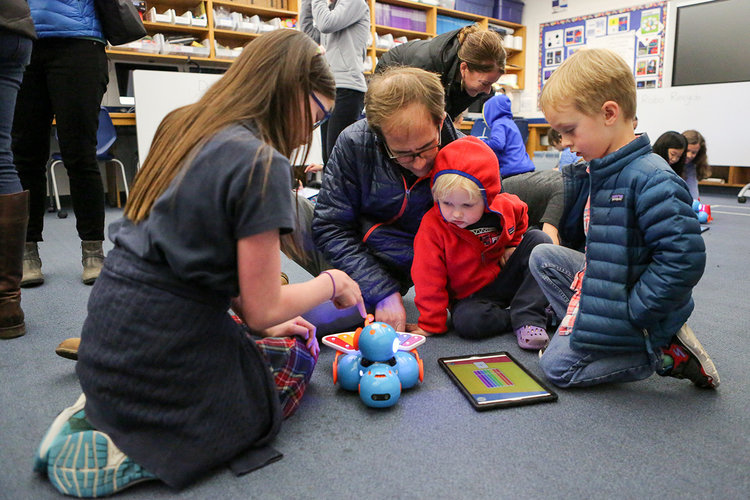 In the STEM lab we explored robotics- there were 3 activities set up for families to try. Robo-Recycling- the challenge was to use block coding to get Dash the robot to push cups into an area on the floor designated for recycling. Dashketball- Dash the robot had its launching arm attached.  The aim of the game was to use block code to try to Dash to launch the balls into a basketball hoop to score. Xylo- Dash had its xylophone attached, and families worked together to create a song for Dash to play.

We also had a number engineering activities:

Domino Diving Board challenged families to learn about cantilevers while trying to build a ledge of dominos that hung over the edge of a box. The challenge was to try to see how far out they could build their ledge before it collapsed.

Let's Communicate challenged families to see how well they could explain a design to a builder. Partners faced each other, but worked inside dividers so that they couldn't see what each other was doing. The engineer built a structure with lego pieces. The builder had to try to build exactly the same thing by following the directions of the engineer (not able to see the completed structure.)

Learning from Failure challenged families to make a boat out of a 4" piece of aluminum foil. Boats were judged on how many pennies they could hold before they sunk.

Inspired by Nature was a card game that involved matching human inventions with their inspiration found in nature.

Science activities included Make the Tinkering Trees for building fine motor skills, Owl Pellet Dissection to discover what owls eat and identify rodent bones, and Camouflage, where families were challenged with finding examples of different types of camouflage on a series of iPad images. 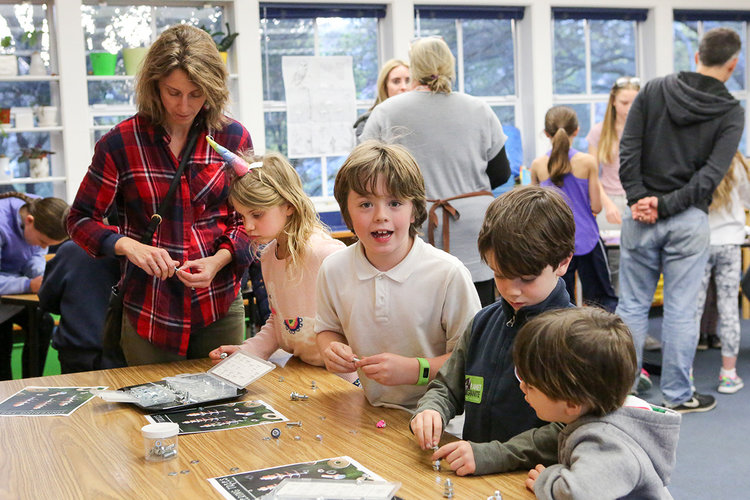 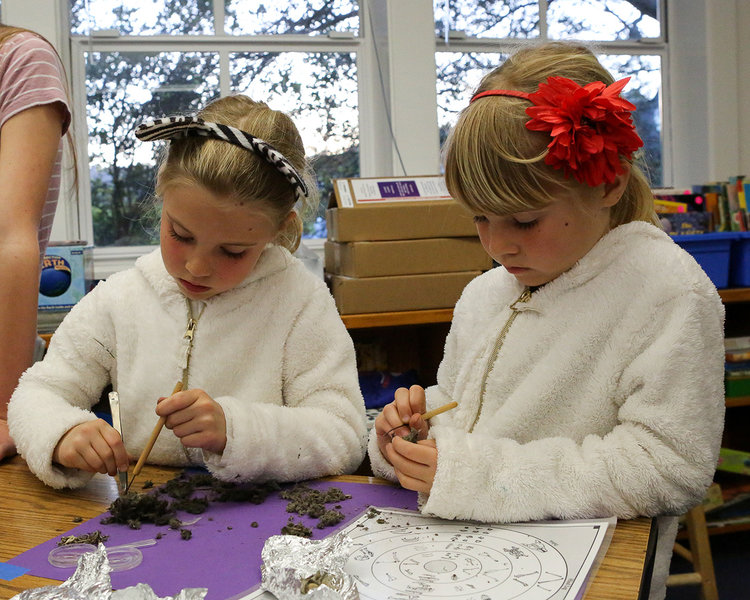 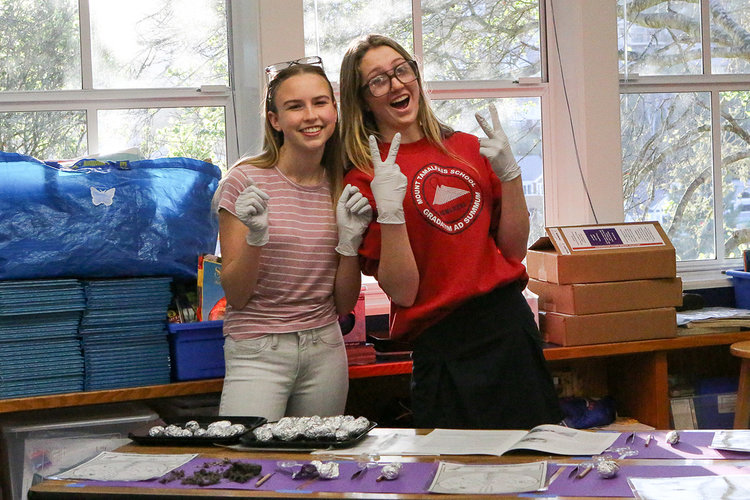 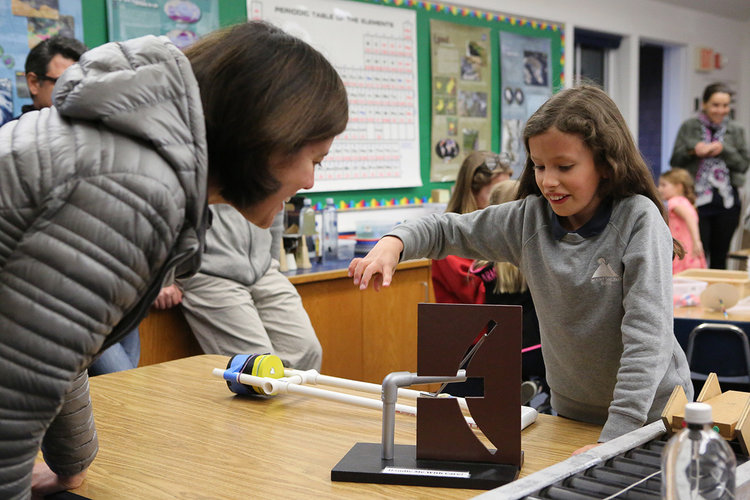 At another station, attendees could watch a video created by two eighth graders demonstrating a density column.

In Eric's room, families could enjoy both physics, chemistry, and biology stations. Your Father's Nose created by a previous MTS student plays with our sense of vision and perception with mirrors that blend two people's facial features into one. Look Into Infinity, also plays a perception trick such that when a viewer looks through a peephole, the mirrors create the effect of seeing 100's of the object (in this case, an apple) as though it goes on until infinity. Other activities included determining if chemistry "mystery" solutions were either acids or bases using indicators, as well as a microscope activity looking at protist cultures of Eugenia, organisms that have both plant (photosynthesis) and animal (motile) characteristics. 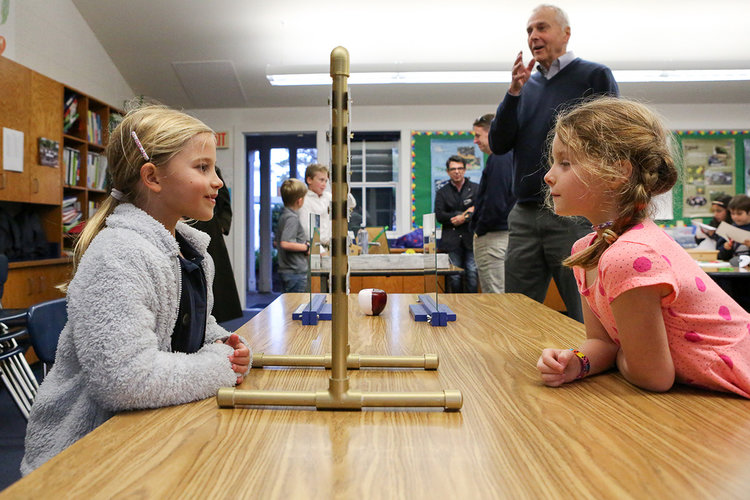 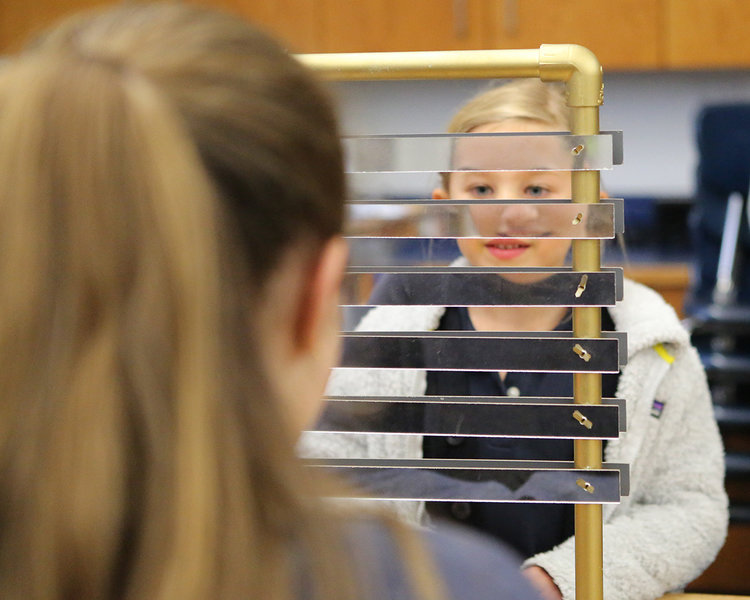 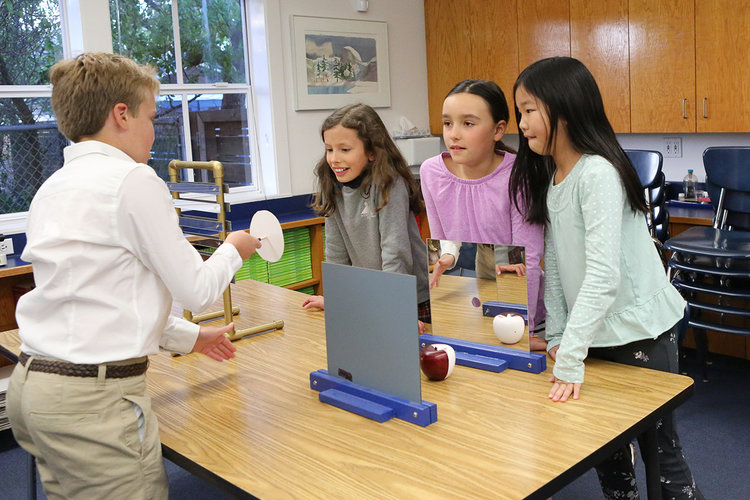 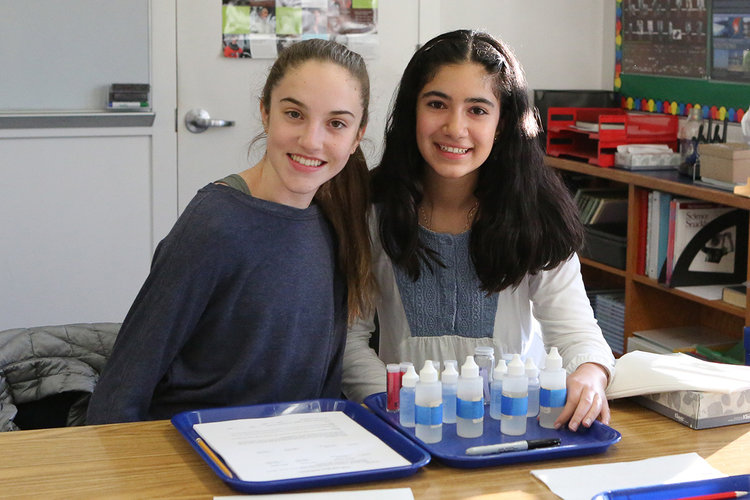 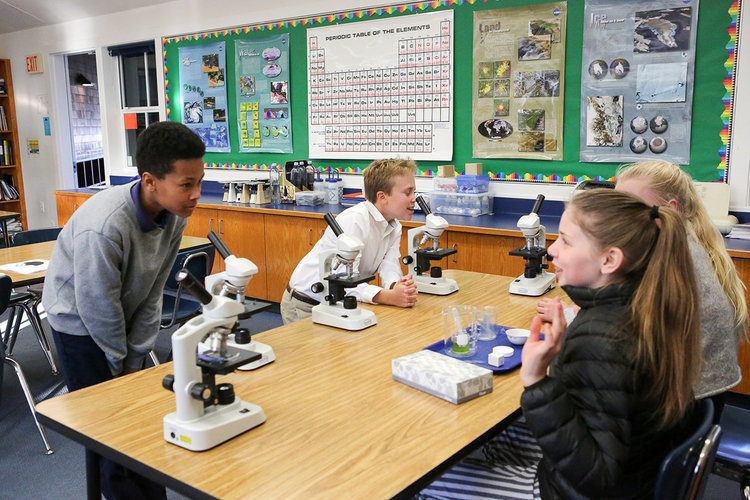 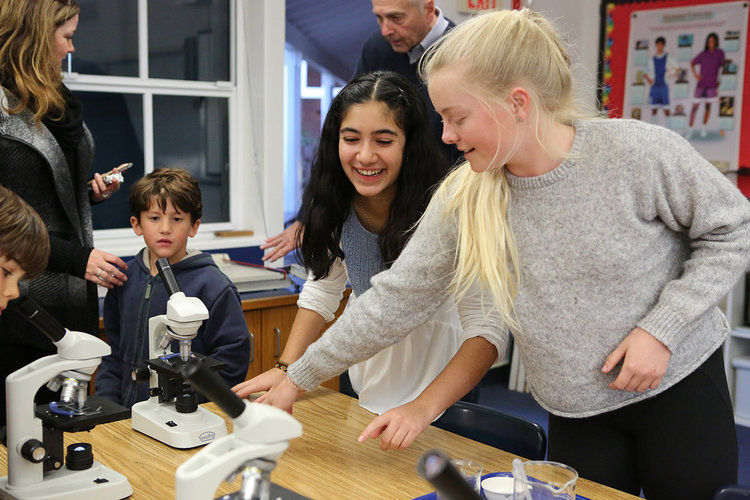 The dice were rolled, the cards were shuffled, the coins were tossed, and a good time was had by all. Children and adults worked together thinking strategically in order to win computationally based games such as Face Off, Before and After, and Target Addition. Geometric thinking was stretched to the limits when building two-dimensional shapes such as squares and stars, and three-dimensional shapes such as pyramids and cubes with an eight foot loop of rope.